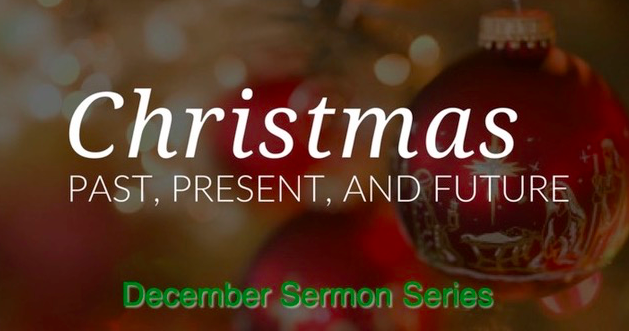 Bert Reynolds December 4, 2019 Bert SermonsChristmas: Past Present and Future
There are skeletons in every family closet that everyone knows are there, but they are often the stories that are not discussed in front of the children, except in whispered tones. That’s why what happens in the genealogy of Jesus in Matthew has always struck me as refreshing.
Matthew gives us the usual genealogy, “the father of, the father of, the father of.” The very repetition makes the brakes in the monotony stand out like speed bumps on the open road. Into a list of fathers, Matthew slips in Tamar, then Rahab, then Ruth, then “Uriah’s wife (Bathsheba)” and finally, Mary. What’s going on? Pay attention to which women he includes.
Every woman has one if not multiple scandalous, typically kept secret parts to their stories. One prostitutes herself to get her father-in-law to do what’s right. The next is a prostitute, who is also a foreigner. The next is a foreigner and a widow. Bathsheba is not named but instead identified by her relation to her first husband, Uriah, reminding us of David’s abuse, murder, and attempted cover up. And lastly there is Mary, a very young teenager, pregnant outside of wedlock. We believe that she’s bearing the Son of God through the power of the Spirit. But do you think that was the talk around Mary? Joseph himself planned to quietly dump her until an angel intervened. Do you see how Mary fits into this list?
Matthew includes pictures that don’t usually make the family album. They are not hidden or airbrushed. There is a spotlight on them as if to say, Jesus sees you as you are. Jesus loves you as you are, because Jesus understands you as you are. Jesus can use you as you are to show that real people with real successes and stumbles can all be a part of the glorious family of God.